What To Expect When You Come To Valencia City

When you decide to visit Spain, you have to choose which of its mini-countries you are going to try to know in-depth, as happens with many other countries. Just like New York is not Chicago and London is not Torquay, eating pintxos in the streets of Bilbao is not the same as drinking fino at the Seville April Fair. Likewise, relaxing on a beach in Fuerteventura (Canary Islands) is not the same as marveling at the Roman theater in Merida (Extremadura).

With this said, if you have chosen to visit Valencia, you are in for a treat.

Besides what all tourist guides will tell you about the typical places to visit or historical monuments you shouldn't miss, here is the definite "10 commandments" of Valencia and the Valencians.

And I don't only mean during Fallas (see below); I mean all year long. Whenever there is a celebration, there is an excuse to light up some firecrackers. The louder, the better.

If you walk by a church and there is a wedding going on, beware of the two or three people (normally men) laying out what seems to be a brown rope with many short sticks tied all over it. They are getting ready to light it up when the bride and groom leave the church. Back away because, believe me, it will get loud. Most locals don't even turn their heads when it happens, but most tourists react as if someone had thrown a bomb or a building had collapsed. I've lived here more than 20 years, and I don't get used to it. It always startles me.

Maybe because of the extreme high volume of firecrackers and their frequent presence in their lives, many Valencians don't have very fine hearing and, thus, are a bit loudmouthed. Don't be alarmed when you hear them talk at a bar or on the street, they are not arguing heatedly, despite the volume. They are just excited and a little hard of hearing.

3. Valencians will speak to you

They are truly friendly and very proud of their city. If you ask for directions, they will walk with you or drive out of their way to help you get wherever you need to go.

Although young people speak some English, if you know any Spanish, you might be confused when you hear them talk since many Valencians mix Castillian with Valencian. Maybe you know the words "chico – chica," "amigo – amiga," or "tio – tia." The last pair mean uncle and aunt, but they are used as "dude." What you probably haven't heard is "tete" or "teta". Valencians are known in the whole Spain as the "tetes" because they frequently refer to each other as "tete" or "teta." (The latter should not be confused with the word for female breast. It's not offensive, and it is only used to refer to a female friend or sister). They also use "nano," and very rarely in its female form, with the same meaning and in the same situations as "tete".

Don't get me wrong. I am not (only) talking about arriving late when they are supposed to meet you, which is a national trait, unfortunately. I am talking about their eating schedules. Don't expect to be able to have lunch, the most copious meal of the Spanish diet, before 1:30 pm, unless you go to a very touristy place or a gastrobar, where kitchens are open all day long.

Given its flatness, Valencia is the ideal city to bike everywhere. You might want to rent a bike at your hotel or hostel, or you might want to use Valenbisi, an inexpensive public bike system that's very easy to manage through its website or directly at the terminal. (There are hundreds throughout the city.). Regarding this system, I have a couple of warnings for you. One, you have a time limit of usage. If you want to take a longer ride, you have to recharge your card at a terminal. Two, make sure you park it well when you return it. (Wait for the long beep.) If you don't, they will charge you by the minute, and it can be a nasty surprise on your credit card.

6. Valencia's wine is great and cheap

If you compare it to the United States or the United Kingdom, eating and drinking are surprisingly affordable in general. Especially if you enjoy wine, this is the place to be. There are many family-owned vineyards in the area of Utiel-Requena, producing more-than-decent red wines starting from 2,50 euros a bottle and great ones for not more than 10 euros. Some companies like Vicente Garcia have grown to reach the international market massively, but the small vineyards are just as good or even better. Try using a group coupon to visit one of them. You'll be surprised of how well they'll treat you, how generous they are with their tastings, and how much fun you can have with the wine-producing-process as you do it yourself (if you dare).

7. The Mascletás at Fallas time

This is a very interesting time of the year, an experience you don't want to miss, unless you hate crowds and loud noises.

Mascletas are the epitome of the Valencian love for firecrackers. Every day from March 1st until March 19th, both included, at 2:00 pm in the main square (Plaza del Ayuntamiento) professional pyrotechnics fire up 240 kilograms of gunpowder in about 5 minutes. Valencians and tourists gather around the area and to enjoy the show. Beware if you want to be close to "the action" because people start arriving at the square around 1:00 pm. They stand there until the Fallera Mayor (a young woman chosen to represent all the falleras that year, sort of a Miss Fallas) says in Valencian "Senyor Pirotècnic, pot començar la mascletà" (Mr. Pyrotechnic, you may start the firecrackers). Everybody claps and screams, and then comes the greatest noise you've ever heard, even if you are far away from the center of the square. I advise you to open your mouth because the sound is even more overwhelming if you don't.

Oh! If you want to have lunch afterwards (I know, it's late, but it's the Spanish perfect time,), make a reservation or run to a restaurant right after the mascleta is finished, especially on weekends and on the 19th.

Valencia has very nice weather from March until June and from October until the end of December. As you may have guessed, January and February are pretty cold (for a Mediterranean Spaniard), between 5 and 10 degrees Celsius, and July, August, and September are awfully hot and humid (for anybody), around 35 degrees Celsius. Normally, hotels are air conditioned, but houses aren’t. Therefore, you would be wise to start practicing meditation or smooth wrist movements for your fan if you rented a house or an apartment. The rainy season (what Valencians call "la gota fria," meaning the cold drop) begins typically at the end of October and continues throughout all of November. You will notice that people use their cars more and that they drive more slowly when it rains. This is because Valencians cannot stand the rain. They will cancel plans and avoid going out altogether, but this doesn't mean the rain here is heavy and unbearable. It's a cultural thing.

9. Paella and other rice recipes

You will encounter many offers of paella, but don't let them fool you. The typical paella valenciana doesn't include ingredients such as fish, shellfish, red pepper, olives or any ingredients other than rice, chicken, rabbit (yes, I know.), garrofon (huge white beans), and green beans. The spices they use are rosemary and saffron, which you should be aware of in case you are allergic to any of them. In addition, paella should be made directly on a fire, though it's hard to find places where they adhere to that ancient rule. Look out for the sign "hecho a leña" if you want to try the real deal.

Other typical rice recipes are "arroz negro" (black rice) and "arroz a banda," both of which include fish and "alioli" or "ajoaceite." (It looks like mayonnaise, but it has a lot of garlic.) Some restaurants also serve "arroz al horno" (rice made in the oven), which includes potatoes, sausages, tomatoes, and garlic among other ingredients.

If you want to eat great paella at the beach (Malvarrosa, Patacona, Saler, or Albufera), I suggest that you make a reservation in advance, especially if you plan to dine on the weekend. Valencians love eating out, and paella is their favorite Sunday lunch. What is my favorite place? Without a doubt, and I promise the restaurant doesn’t pay me commission, is Restaurante La Paz at Malvarrosa beach (25-30 EUR/person). It is very close to Hotel Las Arenas, which, by the way, is the nicest hotel in town and which has an amazing and affordable spa.

You may have tried powdered Mexican Horchata and may have experienced that it tastes like sweet almond milk. However, it cannot be compared with "horchata de chufa" because of the local drink’s unique flavor and due to the fact that the kind of "chufas" (tiger nuts) they use grow almost exclusively in the Valencia region. Actually, some of us also eat chufas as a healthy snack. They look like little brown beans, and they are very juicy, if kept in water.

If you go to the village of Alboraya (just a short subway ride from the center of the city) you will have the chance of tasting the best horchata. At Daniel or any horchata place, they will ask you if you want it "liquida" (liquid) or "granizada" (icy). I'd recommend liquid, if you also want to try and dunk some "fartons," a typical stick-shaped bun.

Spain is, no doubt, always a wonderful choice for a visit. Although some people find it's such a small country that you could visit for just a few days, if you really want to get to know us Spaniards and fall in love with Spain, you need time and planning. After what you have just read, I'm sure, by now, you are feeling inevitably drawn to visit Valencia City specifically. Believe me, the pull of this attraction will make it hard for you to leave once you're here. It happened to me 21 years ago. 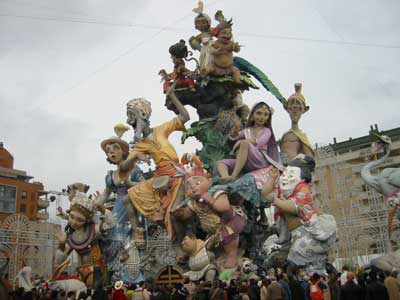