Few years ago the world discovered Cesar Millan, a new media phenomenon which under the name of the 'Dog Whisperer' left us amazed by his ability to communicate with dogs and correct their behavior without the need to use training techniques considered more physical.

As always happens in these cases, the greater his fame was, the more they questioned his supposed 'magic'.

However, once the initial distrust was overcome, it was difficult to resist the genuine, almost mystical way in which he exerted its influence on these animals and which seemed to challenge us to recover some type of primal knowledge about the immutable laws of nature.

Over the years, this knowledge has become a philosophy of life that Cesar tries to transmit and apply through all kinds of social initiatives, talk shows and tours.

We have been testimonies, sometimes without intending to since his videos on the internet as well as his television programs abound, of Cesar's life history which Cesar himself has told us on occasions. From the very beginning in his native Mexico until he became a world-renowned figure. From being an illegal immigrant in the United States to creating a small economic empire. Cesar represents the ideal of the self-made man who, after reaching the land of opportunities, manages to turn his destiny around.

So far everything seems normal. It is not the first media phenomenon, nor the first case of personal improvement whicht is publicly exposed. He is not the first to be assumed to have certain healing faculties or unusual abilities, although he is the first one to demystify them by appealing to a simple matter of common sense or logic. It is neither the first time that we have been drawn to someone's intellectual, religious, or mystical discourse.

Let us therefore admit that, surely in this case too, the phenomenon of Cesar Millan is due to our incessant search for someone in whom to place our trust and attention, sometimes even against his own will, to the point that, in some cases, the chosen person doesn't even need to do anything explicitly. We make them the repositories of our political will to perhaps curb the incomprehensible complexity of a world that is constantly said to be in crisis.

We can always argue about the authenticity, importance or intentions of a person or his message, but we will hardly achieve a neutral position that gives consistency to our arguments because, in fact, nobody looks for that position.

Since nobody is looking for that neutral position, let's say that I can consider myself a 'fan' of Cesar and as such, the first obligatory consideration would be to ask the following question:

Do we understand what Cesar Millan wants to tell us?

As I said before, due to our 'follower' way of behaving, the message of the 'chosen one' takes a back seat. It is not important.

In this way, it should not surprise us so much that our impression, after having followed Cesar's trajectory for a while, is that those of us who should best understand his message, that is, his fans, are the ones who most we misunderstand it. The haters are no longer even a bother. Those who prevent Cesar from expressing himself are the ones who 'get it'. In that sense, it can be said that the fans are prior to the message.

We fans are carriers of something valuable that must be urgently corrected and it is, at that moment, that the 'chosen one' appears or is created.

In Cesar's case, it is quite clearly appreciated. At the beginning of his career, Cesar limited himself to correcting the behavior of dogs and rarely, in his tv-shows, did he refer to the owner as the cause of the animal's disorders. This is the time before his famous slogan 'rehabilitate dogs and train people'.

In that early period, Cesar's manners were, as they continue to be today, respectful both in dealing with the dog and its owner, while many of the spectators we threw our hands up in horror when considering usually the owner as the direct cause of the erratic, altered or aggressive dog's behavior.

With his personal evolution, surely linked to his legal evolution as a citizen in the United States, Cesar is gaining confidence in his speech that he exposes more and more openly. Without ever losing his manners, sometimes showing infinite patience and with a marked communication capacity and charisma, Cesar puts the human being at the center of his message. Dogs have never been the culprits, the ultimate responsible is always the human.

And not only that. Time and time again, through his tv-shows and the way he interacts with dogs, that is, through practice, Cesar gives us endless positive teachings that can help us on a personal and community level.

The strength of a balanced inner energy as the only self capable of communicating without the need to traffic in truth, the importance of authority based on respect and love as the basis of any relationship or the criticism that Cesar makes, never in a way direct or destructive, of possessive and objectifying love as a blind projection of a personal emptiness, all this is part of the potential transforming charge of the figure of Cesar Millan.

But is this really what Cesar Millan wants to tell us?

Cesar's message is based on a primeval misunderstanding. To get his message across, the only way is for Cesar to disappear. We can observe this in many of his tv-shows in which Cesar gets exposed to the obvious danger of some dog in a state of explicit aggression or simply to the irrationality of the animal.

In the force of this sacrificial ritual that we all witness without having to believe or not, Cesar ceases to be the source to become the means through which that particular dog and no other can express himself clearly.

The power of Cesar's message does not lie in its meaning but in the aesthetic truth of the ritual which, with force enough, returns us to our basic and primordial condition as observers.

In the end, the message has reached us in the most unexpected way. It shows that the message is not the important thing and that the fans are right but that it is urgent to correct them. 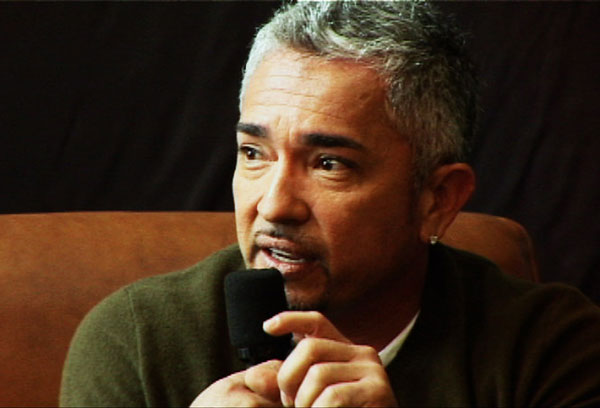